Establishment of a Macedonian Museum

The idea of a museum at the site, however, was not new: in April 1917, not long after Macedonia had been integrated into Greece, the Provisional Government of Prime Minister Eleftherios Venizelos enacted Decree 2134 for the establishment of a “Macedonian Museum”, with a much broader scope. This Museum was to bring together all-important archaeological finds marking the various historical and artistic periods of Macedonia, from antiquity to the end of the Ottoman era.

The efforts to establish the Museum continued into the 1940s by the Macedonian Educational Brotherhood and. after 1950, a group of private individuals, prominent public figures and descendants of famous Macedonian Fighters undertook this initiative. In the meantime, the Archaeological Museum of Thessaloniki had already been founded and the establishment of another museum covering Byzantine times had been decided. This meant that there was a need for a specialist institution that would be devoted exclusively to the period of the Macedonian Struggle. Therefore, in December 1965, the Prime Minister of Greece, Stefanos Stefanopoulos, signed a decree for the founding of the Museum of the Macedonian Struggle at the building of the former Consulate General of Greece in Thessaloniki.

This vision became a reality on 27 October 1982, when our Museum was formally inaugurated by the President of the Hellenic Republic, Konstantinos Karamanlis. A few years later, the Museum was placed under the responsibility of the Museum of the Macedonian Struggle Foundation, which closely cooperates with the Association of “Friends of the Museum of the Macedonian Struggle”; in fact, three of its members, in line with the Foundation’s charter, sit on its Board of Directors. 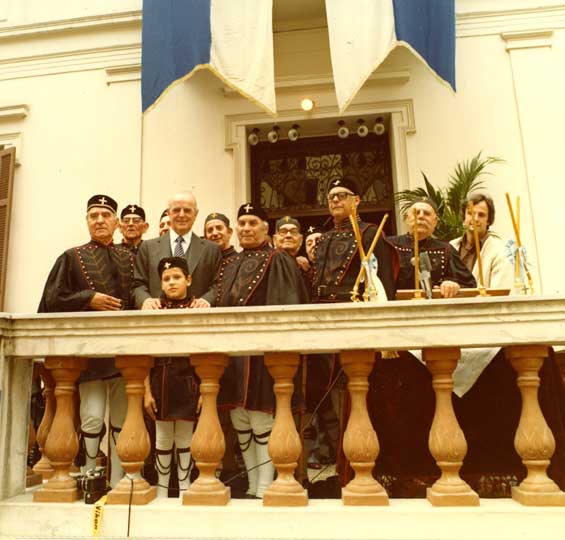 The Friends of Museum of Macedonian struggle

The first building on the site of today’s Museum, of the Greek Consulate is built.

The fire of 22 August burned the building to the ground.

The construction of the new building designed to plans of renowned German architect Ernst Ziller is finished.

It houses the Greek Consulate General in Thessaloniki. The first General Consul was Georgios Dokos.

Macedonia was liberated and became a part of Greece. The consulate stopped its function. The building became a property of the state.

The building housed successively: the Agricultural Bank of Macedonia, the National Bank, the 21st Elementary School, soup kitchen of the Hellenic Red Cross (during the German occupation), a Girl’s School, a Night School and the 43rd Elementary School.

After that year‘s disastrous earthquake, the building was renovated. The government granted the building to the association of the “Friends of the Museum of the Macedonian Struggle”, in order to house the Museum.

The permanent exhibition of the museum is designed by George Anemogiannis.

In 2005, the Museum became part of the Operational Programme “Culture”. The subject matter of the Museum was expanded and the history of the Macedonian Struggle is presented in a more modern way and new media.

Organize your visit to the Museum

Museum Of The Macedonian Struggle